The V8 M3: Why Its Still the Pinnacle of Driver’s Cars

The M3 V8 was one of the greatest drivers cars of all time. When one thinks of a drivers car, only one thought should come across the mind, “a performance car that allows the driver to be more in control rather than the ECU taking the driver for a ride.” Drivers cars come in all shapes and sizes, but most often come in the shape of a 2-door coupe that sends power to the rear wheels. They also commonly come with a manual transmission, as the stick shift offers a more personal connection between the driver and the car. It all offers an experience so intoxicating that it turns people into enthusiasts.

The Germans build some of the best driver’s cars ever created, thus introducing the M3. The BMW M3 has been widely regarded as one of the best drivers cars since its inception. But, in 2007 when they dropped a 8cyl engine into its bay increasing the HP by almost 100, it shook the world, and is still wowing enthusiasts today, 7 years after discontinuation.

BMW M cars are known for their refined handling, and the E9x (2007-2013) M3 is no exception. To put it in simple terms, take all of the glory of an American V8 and fit it with a suspension system and differential that allows the driver to toss the car around a track almost on par with a Porsche 911. However, there are two big differences between a German V8 and an American V8. The M3 revs to almost 8500 RP offering a lot less torque than an American V8. It also has a more unique exhaust note being less throaty and more race car like.

Unlike an American V8 where you can just floor it and it will get up and go, the M3 V8 requires a driver who knows what they are doing. The M3 requires a bit of an experienced driver to know how to push it to its limits. Its actually healthy for the 4.0L V8 to be reved high. Bringing a car to its redline and throwing it into a corner with no hesitation while the back end gets loose yet still keeping control and it all being done well thanks to the driver’s skill is the definition of a drivers car, and the M3 V8 is just that.

Take the handling of a small nimble small displacement or turbocharged car that allows for minimal body roll and point and shoot handling and drop a big daddy of an engine in there; that is the M3 V8. Although it can weigh upwards of 4000 lbs, it handles like a 3200 lb car with double the horsepower available.

Not only will this car help your lap times in the turns, but will give you power on the straight away that will propel you to high speeds quickly and sing a nice tune. The M3 V8 is such a track weapon that it drives like it belongs there. Not only will it reassure you of safety by putting traction back down when you think you have lost it going around a turn, but it will guide the car towards the right apex, while still leaving the driver in control.

Overall, the M3 V8 is a very special performance car that will not ever be perfected like again. Because of the advancement of technology these days the ECU computers in modern cars are in so much control that just about anyone can push performance cars to their limits. 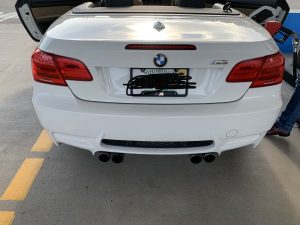 The M3 V8 was a rarity that combined the raw power of a V8 with the handling of an iconic light weight sports car like a Mazda Miata which allowed it to veraciously attack a corner yet stay nimble and connected to the road. Both the 6-speed manual and the 7-speed dual clutch automatic offered an orgasmic experience very few cars have been able to capture in the history of the automobile. In today’s world this is a rare thing.