In the wild, a jaguar may have the most ferocious bite, but its not the fastest nor the most powerful predator out there. Same goes for the Jaguar F-Type R. It has the bite, the roar, the speed, the power, and the elegance, but it’s no lion, as that title goes to either a BMW M8 or AMG GT R in this segment. However, that doesn’t mean it won’t entertain, especially for being $40-50K less than its competition. 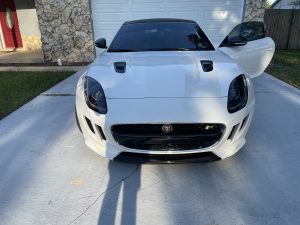 Sure the Jaguar F-Type R may not be on the podium when it comes to performance, but it sure gets the top spot when it comes to its roar. The European V8’s are certainly unique in sound and ferociousness, but the F-Type R is a whole other level of unique. It crackles and pops all day long from driving like a grandmother to revving it like a hooligan. It’s not a deep growl, but a high pitched snarl with rasp that is non other comparable than a race car. But, what kind of performance comes with that incredible sound? 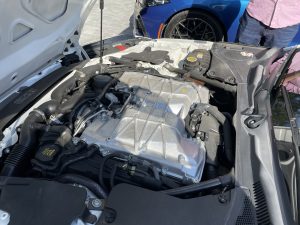 Again, this car for being $40-50k cheaper than its competitors at $110K spits out quite impressive performance numbers. At 550 HP coming from a 5.0L Supercharged V8, the F-Type R will rocket to 60mph in around 3.5 seconds which is easy to achieve with confidence as the AWD system gives it grip.

The quarter mile is in the mid 11 second range while the car reaches 121 mph. These numbers suggest it to be lagging a bit behind its competitors like the BMW M8 CS or Mercedes AMG GT R, as this is the top performance trim Jaguar F-Type, but they are still quite impressive numbers for a discounted price, while the car is just as much a blast to drive.

One performance number that does measure up to its competitors is the amount of g force it pulls. Being England’s grand touring car, one would expect it to feel a bit like a boat, and therefore not being the most snappy when it comes to handling. That’s wrong, as other than the exhaust note, the handling is the most impressive part of the F-Type R. When darting towards a corner the car reacts just like an actual jaguar pouncing after its pray, showing off the amount of G’s it can pull; almost on par with a Ferrari.

Then once out of the apex is when the other strengths of the Type R are shown, as the AWD system help put power to the tarmac launching the car so effortlessly, yet ferociously while screaming. With that said, there is no doubt that this animal of a car is a beast with a jaw dropping roar, but when just cruising along, the weaknesses of this car and the reason why it’s cheaper begin to come to the surface. Not only is the ride a bit rough, but the visibility in the cabin is quite claustrophobic unlike its competitors. 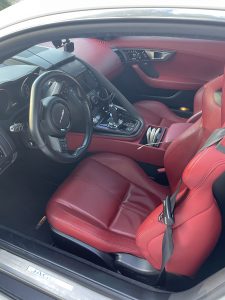 There are also only 2 seats, not enough cargo space to put golf clubs, and it’s quite a muscle spasm to climb into the cockpit. Not only that, but the infotainment is a bit dated even for a 2016 and the discounted price is shown quite a bit in the cabin with lots of cheap materials. However, not that its not a decent place to spend time in, as the Jaguar F-Type is more aimed at the older car enthusiast who still wants to keep up with those BMW’s and Mercedes’ and don’t care about all of the tech and just want some luxury with a unique flavor.

That is exactly what the Jaguar brings at this price point; uniqueness (exoticness). Although it is aimed more towards the luxury and exotic parts of a grand tourer, the comfortability could be better, as well as the presentation, but thankfully Jaguar has done that better in the most recent year models. Overall, the performance for the money and exotic flavor lead by the exhaust note makes this a very good buy, especially on the used car market for a hell of a bargain, but it is missing that something extra special.