The 2020 Mustang GT PP1 is Revolutionary on Track 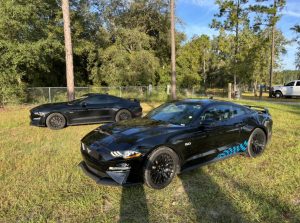 The facelift of the Mustang GT in 2018 might has well have been a new generation, as its performance is world’s difference from the pre-facelift S550 engine. Yes, it has more power, is louder, and has some styling changes such as the quad exhaust and LCD gauge cluster, but the big ticker is the upgrades under the hood. The highlights being MagneRide dampers being standard with every trim and a new suspension.

The new 10-speed automatic transmission, suspension, shock absorbers, and more allow for the Mustang GT PP1 to get around the track like a true sports cars and not just a straight line muscle car. No doubt does it have the power on the straight away’s with a loud voice, but in the corners is where it impresses the most. Not only does it dart towards a corner violently and in a very responsive way, but the Michelin Pilot Sport 4’s help the Stang have great grip allowing it to stick to the track before the newly amped up 460 HP is unleashed when rocketing out to the apex. However, in a autocross type setting where the turns are more constant and tight with things like slaloms, the stang definitely shows its true colors as a muscle car, as the handling is not as an immediate of a response which causes loss of time waiting for the rest of the body of the car to be gathered.

The new 10-speed may be smooth as hell and quick shifting, but it struggles with being in the correct gear when coming out of a corner, unless one is in manual mode, as sometimes it is not high enough in the rev range to give the driver full access to the 460 HP in order to achieve the highest speed possible on the straight away, making it seem underpowered. However, once heading down the straight away, the 5.0L V8 keeps pulling and pulling and seems to be gaining speed even more viscously once it gets over 90 mph.

Other than the lack of instant power coming onto a straight away, the Brembo brakes aren’t the greatest on the PP1. Yes, they are responsive and they get the job done and are a great upgrade on the streets, but the stopping power seems underwhelming as it doesn’t stop quick enough. Plus, often times the back end tends to be a bit squeamish when jumping on the brakes hard, making the car feel less planted. But this could be due to the Mustang still being a pony/muscle car, as it isn’t the the lightest, most refined sports car.

After all, the Mustang GT is still a big brut of an American for under $50K, so the facelifted S550 does have noticeable body roll and doesn’t feel like a teleporting spaceship when darting towards the corner, but its not supposed to nor will it ever. However, with all of the new advancements on the 2020, the GT PP1 feels very sporty and lighter than it is and is very controllable. Now, not saying just anyone could handle throwing this beast around a track, but even when the back end gets out the car is very manageable, and can be customized through the endless driving modes. Welcome to the new age of the Mustang GT (however short it may last); no longer a wild stallion in the back country, but a strong adult thoroughbred on the racetrack.