Ever since the early 90’s the Audi S4 has been a benchmark in the performance segment of the compact executive class. For most of its early years up until 2010 it had the glorious BBK 4.2L V8 engine, that still today is highly sought after, but for the last 10+ years it has kept its debatable crown of the segment with a 3.0L V6 that was supercharged at first then turbocharged. The 2014 Audi S4 was the 5th model year and contained a supercharger on the 3.0L V6, and man is it glorious on the track. 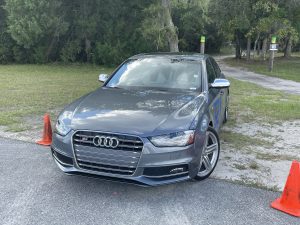 Only pumping out 333 HP and 325 pound feet of torque, one might think the S4 is just a nice sportier/quicker version of the little brother A4, but they would be wrong. 333 HP is plenty of power for a sub 3800 pound car with a compact size wheelbase of 185″. Plus it makes a big world difference having Audi’s Quattro AWD system mounted to it. There is a reason why Audi adds Quattro to over 95% of its vehicles; it’s the king AWD system.

It’s always said that on the track time is made up in the corners, and that’s why cars like the Miata are legendary track cars. The Audi S4 may be quite a bit bigger than a Miata and not exactly a sports car as it is a family sedan, but the B8 generation S4 is a car that makes up time in the corners.

Yes, the rumors are true in that the B8 S4 has some understeer, but its not that noticeable, as the Quattro system and almost instant torque from the 3.0L Supercharged V6 keeps the car tight to the corner then rockets it out to the apex. So much so that any amount of body roll is almost non existent. Point and shoot is the name of the game for this big sized pocket rocket of a sports sedan, as the S4 will without hesitation direct the car to where the driver wants to go, making this car a gazelle in the slalom of a course.

On a standard big track, the S4 has no issues clinging to the inside of a turn so much so that it is hard to get it to track out and reveal its understeer. However, on an autocross course where quick maneuvers like a two 90 degree turns are followed immediately after a slalom, the understeer takes the forefront, as well as normal sedan like body roll and just a decent set of breaks. But that doesn’t mean the steering response and low down torque don’t exist as much as on a big track.

Not only can the driver throw around the S4 with full confidence in the corners, but also have no fear of putting their foot all the way to the ground when exiting a corner, as not only is the power not overwhelming, but thanks to the Quattro system, the car stays very well balanced and the 7-speed dual clutch transmission almost always has the car in the correct gear. But once on throttle on the straight away the 333 HP feels quite a bit sluggish.

Although the S4 may seem a bit underwhelming and not necessarily a fast car on the track, one would be surprised by the lap times it can put down and what cars it can keep up with. After all, a smooth lap is a fast lap and that is a big part of the definition of the B8 S4. Audi did a marvelous job with the 3.0L Supercharged V6; so well that it makes one almost forget about the V8 engine in the previous generations of S4’s. It is certainly a car that will put a smile on any pure car enthusiast’s face as it is a fun zippy daily driver, that can handle a track without breaking a sweat. 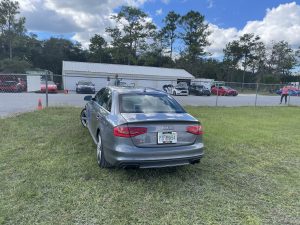