The Challenger Scat Pack: The Last of Its Kind 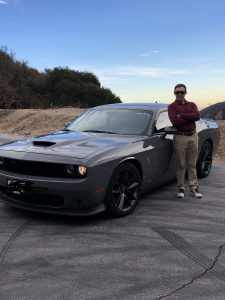 The Dodge Challenger Scat Pack is a big bodied, big engine, true muscle car that is the only car left that resembles the 60’s and 70’s perfectly. Under the hood is a NA 6.4L V8 with 485 horsepower and 476 lb feet of torque. Not only does it cruise around like one is sitting on a cloud while driving a boat of a car, but the 6.4L Hemi makes some unique old school muscle cars sounds that is unlike the other competitors today. And not to mention, the styling is a true flashback, unlike the Camaro and Mustang who have advanced with the times. 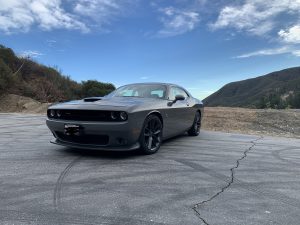 The uniqueness of this vehicle making one travel back into the past is its main positive attribute. It looks like the original muscle cars, sounds like them, and drives like them; well in a straight line that is. With all of this said, the handling (along with the infotainment center) are the only parts of this car that seem modern. Yes, it is a huge vehicle with body roll and a big turning radius, but once in the canyons or on the track, the Scat Pack will prove you wrong! 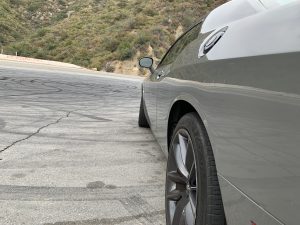 The steering is quite smooth and quick for such a big car, and quite responsive at that. The turn in is quite impressive while the car hugs the corner (while the big bolstered seats give the driver a bear hug) with minimal body roll and keeps pretty good traction coming out, so much so that a drift or getting the back end out is very controllable, so much so to a point that an amateur can pull of a pretty epic drift. However, this brings up one of the biggest weaknesses, I believe in the Scat Pack.

Although the weight of the vehicle, the horsepower and the rear-wheel drive setup suggest wheel spin for days, the throttle response is way too sensitive, as well as the 8-speed automatic being a bit laggy with a low redline. The Scat Pack spins its tires even when one barely feathers the throttle just wanting to cruise from light to light. It also gives the driver a bit of nerves when pulling out in front of traffic despite having enough power to get away quickly. The Mustang and Camaro have minimized the wheel spin tremendously.

Despite, the heaviness of the vehicle giving the driver a sense of confidence in the corners that is more than a smaller sports car at times, pulling out of a corner with the pedal down is a bit unnerving, as it may take a bit of skill to get back control of the car. But, thats not the only big negative about this car.

Although it handles better than one may think, a limited slip differential is offered as an add on option, whereas its competitors like the Mustang and Camaro, offer it on all of their models. A big vehicle like the Challenger needs to offer a limited slip in order to stand a chance on the track against the other muscle/pony cars and to get with the times. Plus it’s more crucial for a bigger sports car to have that limited slip as it will be able to control its power much better out of the corners, as mentioned above. But that’s not the only thing it’s competitors have an advantage on.

Although even its competitors offer cloth seats, the other material in the cabin are better quality than the Challenger, even on the base models. One could even argue that the Challenger should be the most luxurious interior, being more the cruiser than the sports car; although the cabin is pretty quiet. So quiet that the glorious engine noise is subdued, where as the Camaro and Mustang are quite lively and even offer an active exhaust. But, at the end of the day, the Challenger is the muscle car and the other are more so pony cars/sports cars, and the price point of the Challenger is a few grand lower, which is decently fair. 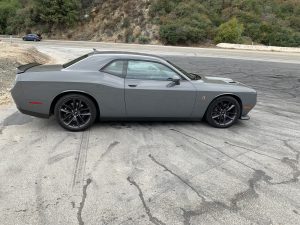 Whatever the price may be and how unique it is for the Challenger to be the last of its kind, there are some things Dodge needs to significantly improve if they ever wish to be on the same playing field, which shouldn’t be difficult because the weight and size of the Challenger is not a road block to that achievement, even without the standard limited slip differential. So, to sum it up, the Challenger Scat Pack is a fun blast to the past with some surprising twists like a spaceship like performance page to customize the driving attack, and will hopefully continue to be frozen in a great era of cars, but time is ticking.