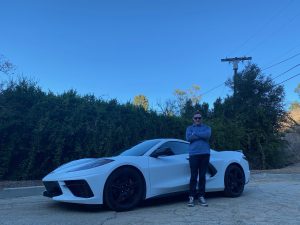 Chevrolet shook the world with the C8 Corvette when it made the rumors of moving the engine to the mid a reality. And the hype has all been worth it. All of the reviews from the auto journalist world saying that the C8 Corvette is a true supercar competitor is very much so.

The C8 Corvette looks like, feels like, sounds like and drives like a supercar, but with a very budgeted price (that is until dealers stop marking up the MSRP by twice the suggested MSRP). The price of this car considering what it offers may be the biggest bang for a buck for a high performing sports car considering the numbers it is laying down other than maybe the Tesla performance models. But, despite it having supercar like numbers, like the acclaimed 0-60 of 3.0 seconds and a low 11 second quarter mile and a 190+ top speed, on the track is where Chevy still has room for improvement. 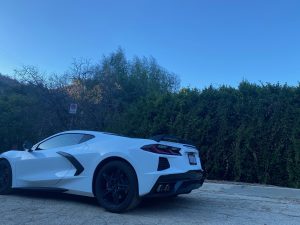 A time of 7:30 at the Nurburgring Ring in Germany is not necessarily top tier, but it’s not slow, at all. That time is right there next to cars like the Audi R8 V10 Plus, Nissan GTR, and Mercedes SLS AMG GT, which are all priced at $40-100K more (depending on what the price point will level out to be for the Z51 package) and have upwards of 120 more horsepower. But, driving this car and feeling its potential with the new lightening fast 8-speed dual clutch and great weight distribution, there is certainly room for improvement to move that lap time up the ladder to the low 7 minute times.

Although the sticky Michelin Pilot 4S’s along with the smooth dual-clutch transmission and mid-engine design help the C8 stick to to road so well and rocket out of a corner, there is significant understeer. This means that when tossing the car into a corner, the car tends to want to want to go out towards the outside of the turn instead of hunkering down and hugging tight. The C8 not only doesn’t quite do that, but it has some noticeable body roll (more so lean) where you feel the wideness of the car.

This is where the C8 lacks supercar character. Supercars like a McLaren or Ferrari will dart towards the corner so abruptly with such grip that the G’s pulled will make a normal person maybe pass out.

However, the understeer isn’t necessarily a negative in the fun department as this allows for a pretty easy opportunity at a power slide/drift. The C8 comes out of a corner very well by putting down its 485 horses so smoothly thanks to the dual-clutch transmission, and very controllably at that. With that said, the C8 is an a very enjoyable/relaxing ride when you want it to be. The engine noise and road noise is very subdued cruising on the highway or taking it easy through the back country roads with the targa top off. The acceleration is smooth and deadly. Even a grandmother can drive this car.

But, no matter how relaxing a ride it may be, it’s a bit nerve racking as the blind spots in this car are absurd, so much that the safety cross traffic alert features offered are a must have. However, the big hood that was hard to see over in the past is now gone because the engine is in the mid, so that’s a huge plus.

The infotainment is quite simple to operate and responsive. It has all of the new cool features that one would want these days including a very customizable drive mode setup and a cool looking digital cockpit. Along with that, Chevy offers a very expensive leather wrapped looking interior with nice comfortable, but bolstering sporty seats. It’s certainly a cabin you can spend long road trips in.

Whether one is daily driving the C8 or taking it to the track (should option for Z51 pack to help with understeer a bit) or both, the C8 will not disappoint. At this price point, with the performance, looks and interior, the C8 Corvette is no longer a sports car, it is a budgeted entry level supercar with a bright future.