Tesla: Why Car Enthusiasts Should Take Them Seriously

EV cars, more specifically, Tesla’s, have been looked down on and/or laughed at for the most part amongst the car enthusiast community. I was part of that group, until I spent two days with one. So, I’m now here to tell you that an electric car is and can be just as much a fun high performance car as any gasoline powered sports car. They can also not only keep up, but put down better performance numbers in some cases. 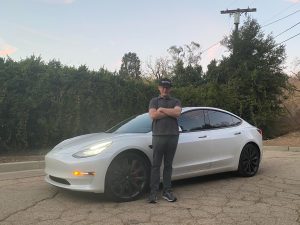 The two full days I spent with the 2020 Tesla Model 3 Performance (Dual Motor) were some of the most intoxicating (in a good way) days I have ever spent with a car. One would think, “oh you’re going to miss the engine noise and gear shifting;” well I actually didn’t even notice those things being absent. The Tesla is so futuristic and interesting that it was like playing a video game, which makes it addictive.

Speaking of addictive, the instant acceleration is blindingly quick (0-60 in 3.0 seconds) and it is just as fun and explosive from a dig or roll. The second main thing that made the experience so baffling was the regenerative braking, which basically slows the car down the instant you take your foot off of the gas. The only time one needs the break pedal is if you have to come to an abrupt stop or are on a decline. It’s such a cool/weird thing that it’s something that you have to experience on your own.

The regenerative braking, I believe, is the key to the, what feels like, superior handling (of course the AWD helps). The half second or so it takes you to move your foot from the gas to the break before an upcoming curve is a crucial amount of time, so by keeping your foot in the same place and just letting it off a bit allows you to stay on the gas a bit longer before the curve.

This game changer helps the car feel like it has tons of grip while hugging the corner (and not to mention the great weight distribution with the batteries being in the middle). The other factor that makes gliding through the canyons feel on par with other high performance cars is the instant torque and power coming out of a corner. With a high revving car like a Porsche 911, one has to have the skill and knowledge to keep the car around 5-7K RPM so that the power and torque is there when exiting an apex. 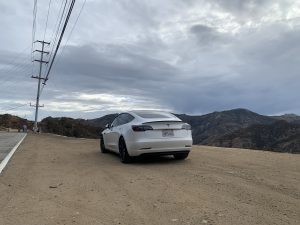 However, no matter how well the Tesla performed, something felt amiss. When flying through the canyons chasing down cars like 911’s, M cars, etc, something was just missing. No no, it wasn’t the lack of engine noise or the extremely smooth ride. It was the fact that it felt like I was at home playing a car racing game in my living room.

The computer felt in control. When I was pushing the car to its limits, it felt like the car was saying “hey, why the need to go so fast, are you sure you want to go fast?” It’s like even though the Tesla is totally capable of it, it didn’t see the reason, whereas a car like a BMW M2 or Audi R8 are speaking to the driver begging to be pushed harder, like it knows what it is.

However, the lack of so-called character would not hold me back from purchasing a Tesla over a well known high revving twin turbo or NA big engined car. Plus, there are other things that intrigued me about the experience.

Basically everything is controlled from the movie-theatre sized screen in the middle of the dash. It’s like a video game on wheels. The amount of things you can do from watching Netflix to a track mode feature that allows you control the stability, steering and distribute power however you want from front to back, the Tesla is mind bogglingly unique.

Overall, the Tesla experience is not like any other, and so much so that its hard to directly compare to any other car. The bland, yet beautiful interior and exterior combined with the performance and cool factor makes the Tesla one of my favorite vehicles I have ever tested. I am determined to own one in the future.

P.S: The worry of it having long charge times and not a huge range shouldn’t be a worry. If you are just commuting to work every day less than 120 miles you can simply get around 35% of increased battery life over night by plugging it in. And if you have to take it on long trips over 250 miles, no worries, who wouldn’t want to watch Netflix for 30 mins or grab some lunch while charging their car.